What has been seen cannot be unseen.

As a kid watching Gilligan’s Island, and loving the theme song, I always appreciated the word play at the end of the second stanza. This enjoyment of clever phrasing migrated into my love of good storytellers and more than a passing passion for puns.

One of my favorite lines from any book is from Douglas Adams’ The Restaurant at the End of the Universe where the author describes a scene with aliens watching the book’s main character, Arthur. The line read, “All eyes were on Arthur, some were on stalks.” A line that I find infinitely funny and still laugh at whenever I read it. (Maybe you had to be there, but trust me, it’s funny.) Sadly, lines like this get lost in the translation to video.

For Gilligan’s Island the wording is much darker. In one line the theme song seems to be praising the crew of the Minnow, in the next – using the same words – their impending marooning is foretold. A great and powerful line in what seems like a jaunty and somewhat flippant little intro diddy. Did the writers intend for the line to be so dark? Who knows? But I hear it that way every time. 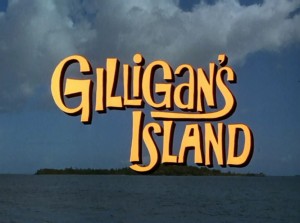 Just sit right back and you’ll hear a tale
a tale of a fateful trip,
that started from this tropic port,
aboard this tiny ship.
The mate was a mighty sailin’ man,
the Skipper brave and sure,
five passengers set sail that day,
for a three hour tour,
a three hour tour.

The ship aground on the shore of this uncharted desert isle
with Gilligan,
the Skipper too.
A millionaire and his wife,
a movie star,
the proffessor and Mary Ann,
here on Gilligan’s Isle.

So this is the tale of our castaways,
there here for a long long time.
They’ll have to make the best of things,
it’s an uphill climb.
The first mate and his Skipper too
will do their very best,
to make the others comf’terble
in their tropic island nest.
No phone, no lights, no motor car,
not a single luxury
like Robinson Crusoe
it’s primitive as can be.
So join us here each week my friends,
you’re sure to get a smile,
from seven stranded castaways
here on Gilligan’s Isle!